This Sunday, December 3, Logan Ryan of the Tennessee Titans will wear custom made cleats representing The Ryan Animal Rescue Foundation and Handsome Dan's Rescue as part of the NFL's #MyCauseMyCleats campaign. These cleats will later be auctioned off and proceeds will benefit these two animal welfare organizations.

The Ryan Animal Rescue Foundation partners with animal welfare organizations around the world promoting adoption and offering grants and educational opportunities to better the lives of animals. We are best known for our flagship program, #RyansMonthlyRescue, where an adoptable dog is featured on Logan Ryan's social media pages each month in hopes of finding a forever home. We have recently expanded our foundation to provide grants to other animal welfare organizations in order to improve the adoptability of dogs in need of training in shelters/rescues.

Handsome Dan's mission is to assist with the placement, care, shelter, training, and overall well being of canines in local shelters and other facilities throughout the state of Rhode Island, as well as to raise funds to assist with veterinary care and spay/neuter assistance for canines who may not otherwise obtain such treatment and raise awareness about the equal treatment of all canines, regardless of breed. The organization is named after Handsome Dan himself, a pitbull-type-dog rescued from Michael Vick's property during a highly publicized dog-fighting operation. Adopted from Best Friends Animal Society in 2010, Handsome Dan inspired his adopter, Heather Gutshall, to create this organization, improving the lives of countless animals throughout the country.

Tune in Sunday, December 3 at 1 pm EST to watch Logan Ryan and the Tennessee Titans take on the Houston Texans in a game where players' inspiration will be showcased on their feet! Stay tuned following the game to learn how these cleats could be yours, just for supporting a worthy cause! 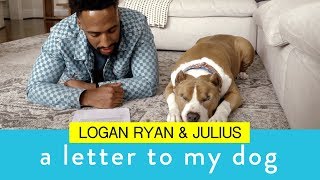 A Letter to My Dog 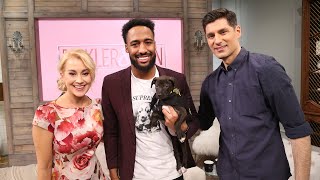 Listen to Logan plug The Chow Down!

Nothing compares to the love of a shelter pet!